In 2021, Glencolmcille celebrates the 1500th anniversary of the birth of Colmcille. According to the Life of Colmcille compiled in 1532 by Manus O’Donnell (see below) the saint came to Glencolmcille and cleared away the demons in the valley (Senglenn Colaimcille, the old valley of Colmcille). The traditional Turas held every year on 9 June still marks his feast day.

Colmcille was, according to the folklore handed down to us, born on December 521 in Gartan, Co Donegal. His mother was Eithne, his father was Fedelmidh but more important than either, his great grandfather was Niall Naoi nGiallach , Niall of the Nine Hostages.

Niall hovers in the background of early Gaelic history, a near legendary figure himself. Through their descent from him, the Ua Niall asserted their right to rule all of Ireland for a thousand years. Few Irish kings ever ruled the entire island successfully, but from Niall, the idea was handed down that there should be one such king.

Niall is even credited with the raid that brought Patrick to Ireland.

It seems he even left his genetic mark on the county. According to research carried out in the 2010s, it is likely that one in five Irish men are directly descended from him in the male line. Pretty much every Irish person is his descendant, particularly those in Ulster who carry the surnames of the Ua Naill: names like O’Neill, O’Donnell, Doherty, Cannon.

But back to Colmcille.

We know with certainty when most saints died. The Saint’s Day was added to the calendar by the faithful, usually within a few years of their death, and approved by the local bishop shortly afterwards. Until the twelfth century or so, when the church in Rome added new layers of bureaucracy to create the canonisation process, it was though this sensus fidei fidelium (the “sense of the faithful”) that new saints were recognised. Colmcille’s day is 9 June, and he died on that day in 597. 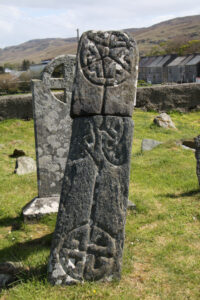 What we don’t always know with any certainty is when saints were born. Patrick was born around 385, but we’re not certain of the year. Even the year he died varies in different accounts of his life. But the day of his death we know. 17 March.

We are told Colmcille was born on 9 December 521. (There’s some debate that it might have been 520, as the years were counted differently back then. As a result, the anniversary celebrations run from December 2020 until December 2021.) But even allowing for this, the level of precision is unusual. We might expect to know the year, maybe even the season of saint’s birth, with stories of how he was born in the depths of winter. But knowing the exact date is unusual. So how do we know Colmcille’s birthday?

Well, we know because Colmcille wasn’t a random infant. He was a great-grandchild of Niall. And under the old Irish laws of succession, that meant he was part of the derbfine, the male descendants of a king who have a legitimate claim to become kings in turn. Colmcille was royalty.

That royal blood goes a long way to explaining Colmcille’s personality. Even before he became an abbot and holy man, he was not a man used to being refused.

Like Cú Chullain, who was born Setanta, Colmcille was born with another name. As a youngster he was known as Criomhthann, (fox), from which we might hazard a guess he had red hair, at least in his youth. He was given the nickname of Colmcille (churchdove) because he spent so much time in prayer. And like Cú Chullain, he fought battles on his chariot. 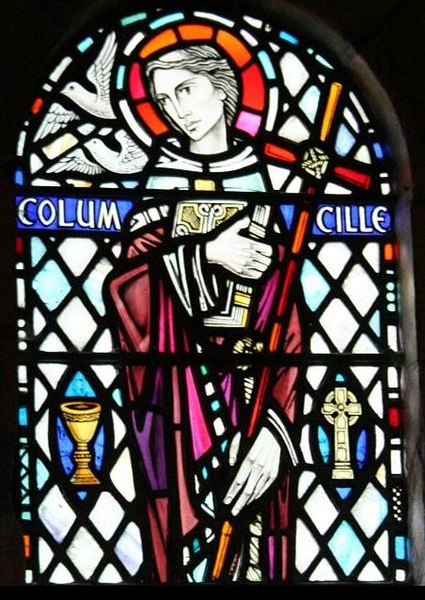 COLMCILLE AND THE DEMONS

When Padraic had banished and driven away the evil spirits from Cruachan Aigle that is today called Cruach Padraic, there went a throng of them to the place that is now called Senglenn Colaimcille in the region of the clan of Conall Gulban to the north. And they were in that place from the time of Padraic to the time of Colnucille. And they raised a fog about them there, so that none might see the part of the land that lay beneath that fog. And of the river that formeth a boundary to the north they made a fiery stream so that none of all might go across it. And whoso should touch of that stream little or much, he should die straightway.
And angels of God revealed this thing to Columcille. And he went with many others of the saints to drive away the demons and banish them out of that place. And they made a stay beside the fiery stream we have aforementioned. And they had not been long there when the Devil hurled a holly rod out of the fog across the stream. And it killed An Cerc, Columcille ’s varlet, with that cast, so that Srath na Circe is the name of that stream thenceforth.
Thereat Columcille waxed exceeding wroth and he seized that same javelin, and hurled it across the stream. And the land was yielded to him for the space the javelin went into the fog, for the fog fled before that cast of Columcille’s.
And that javelin grew in the place whereas it struck the ground that time, so that today it is a fresh holly-tree, and it hath not withered from that time till now, and thus it shall be till Doomsday.
Then Columcille blessed that stream, and its venom and enchantment departed therefrom. And he crossed it. And an angel brought him a round green stone, and bade him cast it at the demons, and they should flee before it, and the fog also. And the angel bade him throw his bell Dub Duaibsech at them in like wise. And Columcille did as the angel commanded him, so that the whole land was yielded to him from the fog. And the demons fled before him to a rock out in the great sea opposite the western headland of that region. And Columcille cast at them that stone that the angel had given him, and his bell Dub Duaibsech. And he bade the demons go into the sea through the rock whereas they were, and to be in the form of fish forever, and to do no deviltry against any thenceforth. And by reason of the word of Columcille they must needs do that. And a man having on his armour might go through the hole they made in the stone, when they went through it into the sea. And lest folk should eat them, Columcille left a mark on them passing every other fish, to wit, that they should be blind of an eye and red. And fishers oft take them today, and they do naught to them when they perceive them, save to cast them again into the sea.